The Chicago Bears Oakley NFL Low Key Sunglasses were crafted with the hearts of Bears fans in mind, the Oakley Low Key is a true representation of what the Chicago Bears Organization stands for. What better way can you support your favorite team than with a pair of Oakley NFL Sunglasses? Don’t hesitate to grab your pair of Low Key Sunglasses for game days and everyday use. Prescription Rx lenses are available in this frame as well.

The Chicago Bears are a team with a rich history and is one of the oldest teams in the NFL. From the beginning the Chicago Bears were the team to watch, back in the 1920’s they were the first to buy another player from a different team. This team dominated all throughout the early years of the NFL. The Bears fell on some hard times but then with a change of staff and fresh talent they rose back in the ranks again. Walter Payton was one of the most talented and remembered Bears players! An explosive running back that helped turn the Bears losing streak around.

Another important part of the franchises history is Mike Ditka, which successfully coached the Bears and led them to secure a Super Bowl title in 1985! The Chicago Bears have had a total of two super bowl appearances and continue to fight for more! The Bears have had the best defense in the NFL for many years and they continue to strive for greatness through injuries and anything that comes at them! Their fans are dedicated and will support the Chicago Bears no matter what! The Bears Oakley sunglasses are a perfect way to represent such a hardworking team and monumental players throughout the history of their time in the NFL. 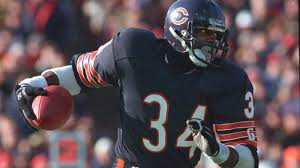 What year did the Chicago Bears  join the NFL?