Engineered for performance for lightweight and semi rimless design, the Oakley Flak 2.0 are a perfect fit for hardcore Cleveland Browns Fans to sport on game days and they are even great for everyday use! The Oakley Flak 2.0 is also durable and meant to last, they are known as high definition optics which ensure that you are getting a great high quality product! You will not regret purchasing a pair of Browns Oakley Flak 2.0 sunglasses. Prescription Rx lenses are available in these frames as well.

Did you know that the Cleveland Browns are the only team in the NFL without a logo on their helmets. The Browns franchise has some of the most loyal fans in the NFL also. Their fans show up win or lose and continue to root for their team without any regard to stats or what critics have to say! Before the Cleveland Browns joined the NFL they were the team to beat and dominated the AAFC when they finally became a franchise within the NFL their dominance continued for quite some time! More recently the Browns have acquired promising draft pick Baker Mayfield and Odell Beckham JR has joined the squad as well! As a die hard Cleveland Browns fan, there is no better way to support your team then wearing some Oakley sunglasses. 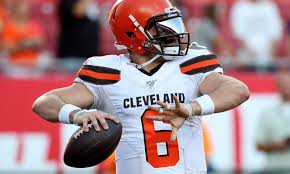 What year did the Cleveland Browns join the NFL?