The Dallas Cowboy Oakley NFL Holbrook Sunglasses were crafted with the hearts of  Cowboys fans in mind, the Oakley Holbrook is a true representation of what the Dallas Cowboys Organization stands for. What better way can you support your favorite team than with a pair of Oakley NFL Sunglasses? Don’t hesitate to grab your pair of Holbrook Sunglasses for game days and everyday use. Prescription Rx lenses are available in this frame as well.

The Dallas Cowboys are dubbed as “America’s Team”. This team has had several of the best players in the NFL play for them. These players include Emmitt Smith who was an all time rusher. Roger Staubach who helped lead the Cowboys to 2 Super bowls during his time! Other top players are Troy Aikman, Jason Witten, Tony Dorsett, Michael Irvin, Randy White and Bob Lilly. The Cowboys franchise has been to the Super Bowl 5 times and has won all of them. The franchise its self is worth a whopping 5 Billion dollars. The Cowboys have been the NFLS most valuable team for twelve years in a row!

The state of the art AT&T Stadium was built in 2009 and is fit for America’s Team. This franchise is also the only team in the NFL that has a record of 20 straight winning seasons! The Cowboys have a devoted fan base that will represent their team win or lose. A great way to show team pride is with custom Cowboys Oakley sunglasses! 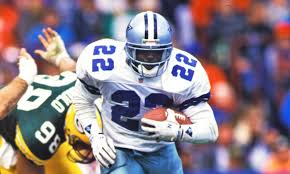 What year did the Dallas Cowboys join the NFL?